Mike Jobe (espeemike on the blogs)
I am a 50's something middle class American man. Among my hobbies are woodworking, stain glass, and railroading. I am currently working towards my MMR (Master Model Railroader) and this blog will give me an opportunity to show my skill set. My father joined up with the Southern Pacific Railroad shortly after world war II. He worked there until his retirement. My wife's grandfather, great grandfather and great great grandfathers were engineers for the Cotton Belt RR and logging railroads of old. With that said, this blog is pretty much dedicated to my interest of railroading (both model and prototype)and its various elements. In addition, some of this blog will be focusing on the Disneyland Railroad of which, I spent many of my childhood and adult moments on. I welcome any comments.

Here is just a collection of things that I enjoy and will give you a better idea of the world I live in....
Please take some time to browse through my previous postings on the left side of the page.

I hope you enjoy my random thoughts and blog subjects...
thanks - Mike


Latin ferrum iron + Latin equus horse + -logist
A railroad or model railroad enthusiast. (From Dow's Dictionary of Railway Quotations.) "Ferroequino" derives from the Latin for "iron horse," an early term for a locomotive.

Just taking a bit of time off...

Hello fellow train nuts, I have had a ton of things come up that are paramount over my hobbies and decided to put down the Exacto knife, and trim back my hobby time. A hobby is just a hobby, and family comes first. I will be back soon. Thanks for coming by and I will talk to you all soon. In the mean while, the 2013 LSR NMRA convention is coming up, I am running the clinics and we will have a boat load of excellent clinicians. I hope you can make it! 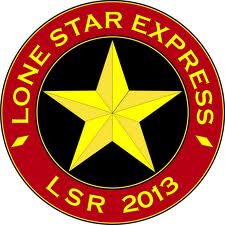 Posted by Mike Jobe (espeemike on the blogs) at 8:31 PM No comments:

Here is a video of my latest diorama I entered in Houston last week. I am pretty happy with the final product hope you enjoy it. It took 1st place Dioramas, 1st place Automation at the convention.

Email ThisBlogThis!Share to TwitterShare to FacebookShare to Pinterest
Labels: From My Workbench, Movie Time

Well I have been cramming to get a model ready for the  up and coming NMRA Lone Star Region convention being held in Houston Texas from June 6th through 10th.  As with every year, I wait until the last minute to get it ready for judging. I will say however that it is coming along well. Just have some finishing touches I am working on to take it to the next level. I have been inspired by Laurie McLean MMR from Australia regarding his work with automation (thanks Laurie your work is incredible) and will try a couple of things he has done on my scene as well as one I dont think has been done before. Anyway if you get a chance check out his youtube channel at http://www.youtube.com/user/scoopmmr

Well back to the workbench and hope to see you in Houston!... here is the link for the convention.... 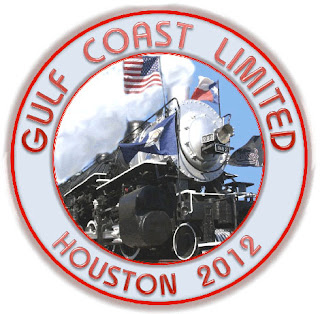 http://sanjac.leoslair.com/LSR/
Posted by Mike Jobe (espeemike on the blogs) at 12:40 PM No comments:

Another Edison Movie showing a SP double header reefer train with a helper unit, probably somewhere in the Sierras in 1898. Enjoy...

Posted by Mike Jobe (espeemike on the blogs) at 11:40 PM No comments:

Research makes for a great layout

Its a lazy Sunday afternoon and I was doing some fundamental research for my layout. As you may or may not know, I model from 1940 to 1945. This era is interesting to me due to my father being in the 101st Airborne and my Mom the bride awaiting his return during WWII, they were married on Dec 7th 1941 (sound familiar?). Moreover I, like most guys, are fascinated by the War and its affects worldwide. It was when the railroads were in their zenith and the home front was geared up and a well oiled (and lean) machine. But there are a ton of things you have to realize when locking yourself into a certain era to model. Certain sacrifices need to be made such as eliminating models that did not appear in that era. This include automobiles, rolling stock, and locomotives. (Gone is that nice shiny 57 chevy and GP 35's in my collection). If the box car is over 40 feet in length you better question what type it was and what year it was produced. Only early 1st generation diesels are allowed and of course the good part of this equation is lots and lots of steam, well worn, weathered and beaten up steam. Making things nice and clean with fresh paint was not a priority during these years but rather how much equipment, troops, and supplies they could move was the theme of the day for railroads.

So to keep truly honest with myself when I model, and since I did not live in that era, I have to research a great deal on how it was to live in the good ole USA during the war. The sacrifices that were made and the things that would seem alien in today's world that were readily acceptable during this time frame.  Its one of those situations where I wished I would have asked mom and dad about these things when they were alive but such is life. But I guess deep inside me, I model this era as a tribute to them and the "greatest generation".

With that said, you really have to determine what works when planning, the automobiles is easy, if it was made after 1945 then it goes on Ebay. Actually due to the war private automobile production ceased, even Lionel stopped production of trains and retooled to make compasses used by the Navy and other shipboard devices. 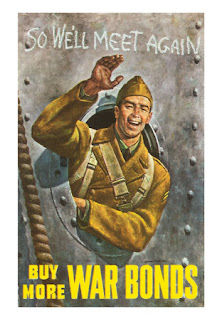 War bond posters went everywhere so I make it a point to place these on fences, buildings, and interiors...

Gas ration tags were placed on automobile windshields as well because everyone was classified by the amount of gas they needed for personal use  and were restricted to that amount. Another way to tell your story is the price of gas that would be on the station sign was in the 19 cent range in 1941 and 21 cent range at the end of the war. Longing for these days now?


Rubber, metal, even butter was in short supply and rationed so your layout should not have a gas station full of new tires. I am reminded of the movie "A Christmas Story" when they get a flat tire during their Christmas tree shopping trip and father takes pride in the time it takes to change one bald flat tire for the full bald spare. 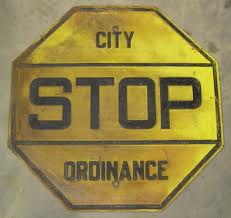 Other facets of life you might not consider are mail boxes were painted green not the red white and blue we are use too. Stop signs were Yellow and Black not red and white as they are now.
There was no such thing as a yield sign, there were not introduced until 1950. 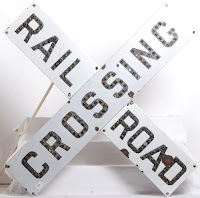 Simple things like the way the roads were marked where different. Until 1971 the center line was white rather than the yellow that is around today. Due to the lack of technology with reflective signs, most signs were not reflective as a whole but rather they contained "cats eyes" which were small reflectors that were used to spell out the sign such as this railroad cross buck.

I guess my thrust behind this post is to influence you to do your homework if you choose to take the route that I have in modeling a particular era in railroading. You know 95% of the people that will see my work  may never notice these minor details, but to me its important to do it right for that 5% that may have lived during that time in history. It is really a tribute to them and the sacrifices they made makes it worth the effort.

Posted by Mike Jobe (espeemike on the blogs) at 4:02 PM 2 comments:

Since Lackland Airforce Base website shut down their WWII poster resource site, I have been searching for a good source of posters to be miniaturized and used on my models. I have been searching around for a single location for these but to no avail. So to the folks who have been asking me the only recommendation I can give is on Google Images. Simply search on "World War II Bond Posters" and it will give you literally hundreds of hits.

Disclaimer, as with all internet content,before you use these images make sure the owner of the content is ok with it.

I will continue to search for that golden website and let you know what I come up with....
Posted by Mike Jobe (espeemike on the blogs) at 9:36 AM No comments:

I have been conducting a series of basic Clinics for my NMRA division meetings here in Dallas. The subject this time is Introduction to Scratch-Building Structures. In it we have been building a small basic shack, it can be a news stand, a fireworks stand, fruit stand or whatever you want. My selection was a supply shack for logging. I hope that several of the clinic attendees will bring their versions in. 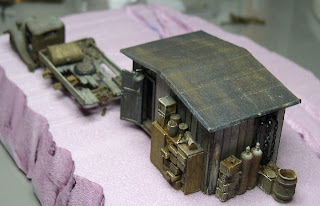 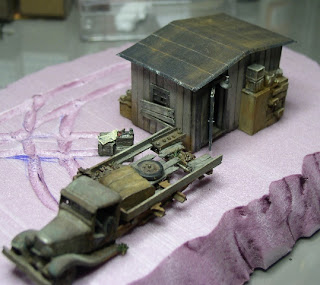 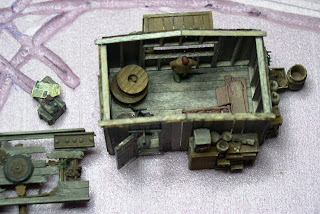 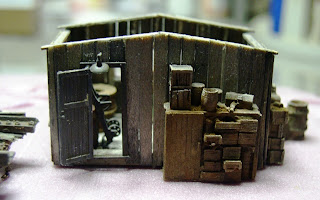 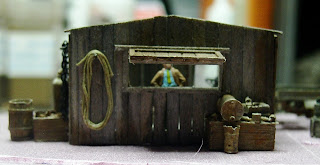 I am working on finishing up the base this week, it was a fun build, but it its a bit funny, it seems the smaller the build the harder the model. Until next time...

Posted by Mike Jobe (espeemike on the blogs) at 9:13 AM No comments:

Email ThisBlogThis!Share to TwitterShare to FacebookShare to Pinterest
Labels: From My Workbench

Birth of a Locomotive - Proof positive that they don't make them like they use too....


Fascinating video of the construction of a steam locomotive...
Posted by Mike Jobe (espeemike on the blogs) at 2:11 PM 2 comments:

this is a set of Photo's that of a FSM Kit I completed a few years back, I wanted to get some daylight shots of it for some time now. this diorama will be located in the urban location of my layout. the layout room is coming along, I had a sheetrock guy come out for a estimate the other day, but I have to pull up half of the floor to level it out. Anyway, here are the shots... 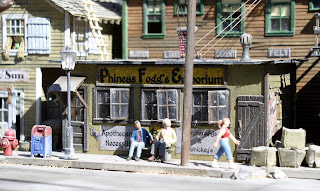 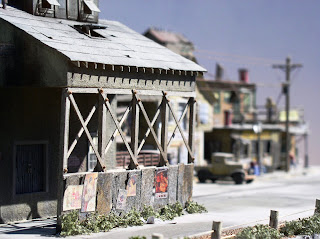 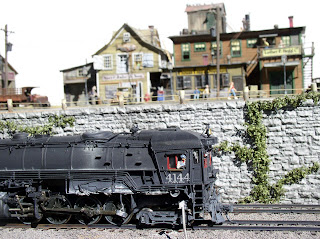 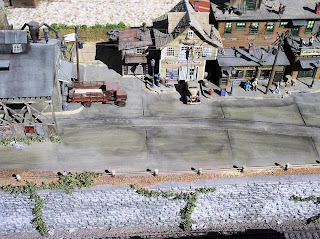 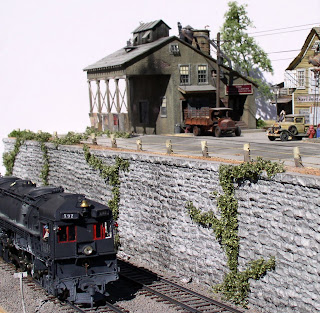 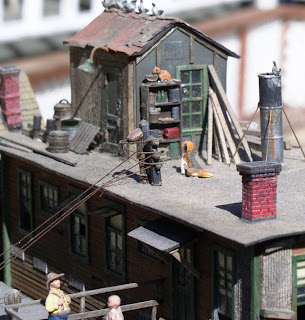 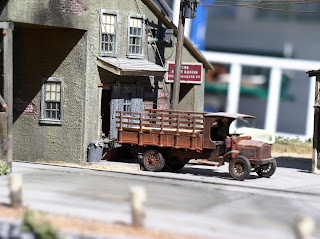 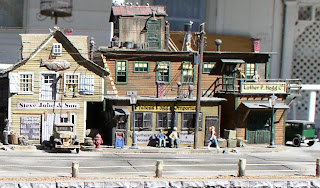 Email ThisBlogThis!Share to TwitterShare to FacebookShare to Pinterest
Labels: From My Workbench
Older Posts Home
Subscribe to: Posts (Atom)